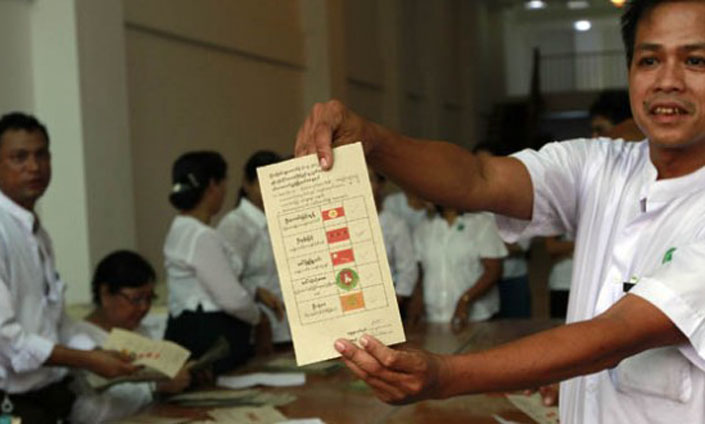 The New Configuration of Power

Burma’s 8 November 2015 general elections—won in a landslide by the opposition National League for Democracy (NLD), led by Nobel laureate Aung San Suu Kyi—have ushered in the second phase of the country’s political transition. The NLD won 390 (79.4 percent) of the 491 (due to the cancellation of seven townships) total elected seats in both houses of the Union Parliament. The party’s triumph represents a
crushing defeat of the incumbent, military-backed Union Solidarity and Development Party (USDP).

Soon after the election results were announced, USDP and military elites signaled their acceptance of the NLD’s victory, and a joint eightmember transition committee was set up to prepare for a smooth transfer of power on 30 March 2016. So after five decades of authoritarian rule, political succession will for the first time be conducted according to formal constitutional provisions. The ruling elite’s decision to abide by the
election outcome shows that the country’s emerging institutions—the constitution, parliament, and the party and election systems that were activated only during the political opening in 2010—have the power and capacity to produce real political change despite their obvious democratic deficits.

Min Zin is a founding member and the executive director of the Institute for Strategy and Policy - Myanmar, which is an independent, non-partisan, and non-governmental think tank, which promotes democratic leadership and strengthen civic participation in Myanmar. He is a PhD candidate in Travers Department of Political Science at University of California, Berkeley. Min Zin is a comparative political scientist who studies civil-military relations, democratization, contentious politics, ethnic conflicts and civil war with a focus on Myanmar and Southeast Asian countries. Min Zin’s writings appear in Journal of Democracy, Journal of Current Southeast Asian Affairs, Social Research: An International Quarterly, Contemporary Southeast Asia, Georgetown Journal of International Affair and many edited books. He serves as country analyst of Myanmar for several research foundations including Freedom House, and he is also a fellow of Legatum Institute. Min Zin took part in Burma’s democracy movement in 1988 as a high school student activist, and went into hiding in 1989 to avoid arrest by the junta. His underground activist-cum-writer life lasted for nine years until he fled to the Thai-Myanmar border in August 1997. Min Zin writes for The Foreign Policy Magazine, The New York Times, and other media outlets.