John Buchanan is the Director of Research at the Institute for Strategy and Policy - Myanmar. He is also a PhD Candidate in the Department of Political Science at the University of Washington in Seattle, Washington. John’s fields of study include international relations, comparative politics and Southeast Asia. His research interests include Southeast Asian politics, civil-military relations, state formation, conflict and its relationship to natural resources. John has written reports and articles in several publications. He is the co-author of Developing Disparity - Regional Investment in Burma’s Borderlands, which was published by the Transnational Institute. He recently authored Militias in Myanmar, which provides background on Myanmar’s complex systems of militias and their roles in conflict and society. John is from the United States and has lived in Southeast Asia for over a decade. 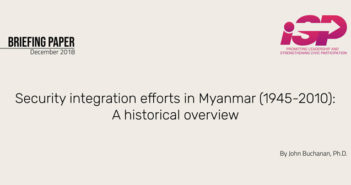